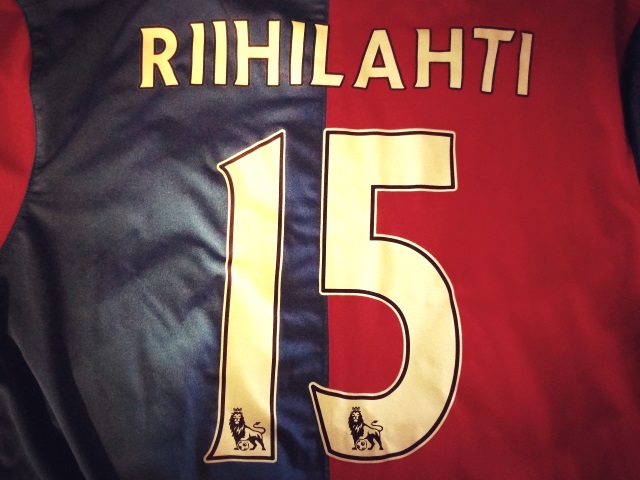 Aki Riihilahti was the first player whose departure I felt real sadness about. He had been an icon of the club's character, playing with personality on the pitch and entertaining off it. He was a hero. My hero.

His arrival came in a season that ended with Dougie Freedman's incredible late goal at Stockport, with Palace competing against Crewe Alexandra for his signature. I remember thinking, 'If it's crew we're competing with, he can't be that good?' He soon dispelled that doubt with heartfelt contributions that helped stear the club clear of relegation.

The great thing about Riihilahti is that he knew his limitations - he didn't have tricks, he wasn't the most creative of players, he didn't score that many screamers - but he was brilliantly utilitarian. His graft helped Palace secure their place in the Football League, and ultimately contributed just a few seasons later to what can still be classified as  some of the greatest months supporting the club.

That time under Iain Dowie, which propelled the club from relegation battlers to play-off contenders, saw Aki play a key role, partnering fellow cult hero Michael Hughes in a combative midfield duo. It speaks volumes of the player that, instead of concentrating on celebrating the play-off win over West Ham with his teammates, he instead took the trophy and walked around the stadium perimeter, giving fans the chance to touch and hold it. He was a player that played for us.

Here it is.. The final episode of CULT HEROES: @akiriihilahti.

The pinnacle of his Palace career for many will no doubt be his goal against Arsenal, latching on to a Vasillis Lakis cross, but for me it was his pass through to Andy Johnson against Fulham that sticks in my mind. A beautifully clipped reverse pass to the striker saw Palace take a 2-0 lead. It showed how far he had come as a player. At that moment, it felt like we were good enough to compete at that level. It wasn't to be.

The seasons that followed were a struggle for Aki and Palace. As Palace's promotion challenge came to an end against Watford, so did his time at the club. Injuries had blighted his final season at the club and, as the core of that squad disintegrated, it made sense for him to seek new challenges.

Aki will forever be welcome at Selhurst Park. His interview with PalaceTV showed that he hasn't lost any of that affection for Palace, and that his personality hasn't changed an iota despite the responsibility that his job as CEO of HJK Helsinki brings. It was like seeing an old friend - with that sense that much had changed but that the relationship between him and us hadn't.