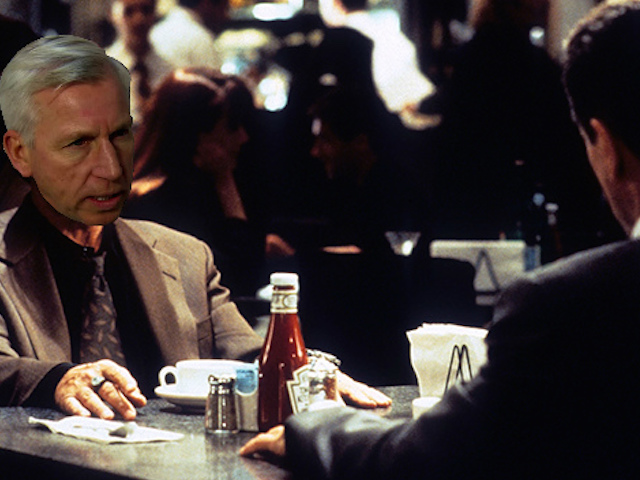 Palace fans haven’t heard from Alan Pardew in a while, since he was sacked back in late December in fact.

But he had his first interview since then this week and opened up to The Times about his departure from Selhurst Park.

It was supposed to be the match made in heaven; an Eagles cult hero returning to the place he played and scored arguably the club’s most famous ever goal (an FA Cup semi-final extra time winner over Liverpool in 1990).

And while there were plenty of classic Pardew excuses during the interview there was one particular quote that jumped out; Pardew comparing being a manager to a scene from 1995 gangster movie Heat, starring Robert de Niro and Al Pacino.

In this scene enemies Al Pacino and Robert de Niro finally meet on screen, cop facing master criminal. As they casually chat, Pacino’s character explains that while it was nice to connect over a cup of coffee they will always be enemies. “You do what you do, and I do what I gotta do,” he says. “We’ve been face to face, yeah,” De Niro responds. “But I will not hesitate, not for a second.”

“It’s a bit like us in football,” Pardew said while referring to the scene. “Chairman, manager, you do what you gotta do. But it’s not personal. It’s the business.”

So here are five movie scenes that are much more applicable for Alan Pardew...

1. Are You Not Entertained?

Pardew constantly went on about how much good football his team played, and Palace fans were all for it, but when the results stopped coming it started to grate.

At points he was like Maximus Decimus Meridius from Gladiator, calling to the booing crowd “Are You Not Entertained?”.

As Sam Allardyce has since proven sometimes you need to go back to basics to get points, and no Eagles fans are moaning about not being entertained. In fact, winning, it turns out, is pretty entertaining.

It’s impossible to think of Pardew without that headbutt on David Meyler at Hull.

Yes he was Newcastle manager at the time, but that moment has followed him for the rest of his career. To be honest, most Palace fans were just surprised we didn’t get to see something similar during his two years on the Selhurst touchline.

Although we did get a moment just as embarrassing…

Pardew pulling out his dad dance moves on the Wembley touchline will sadly forever be associated with the 2016 FA Cup final, a day that should have gone down as one of Palace’s best ever.

Instead we lost to Manchester United again and have to watch Pardew doing his best John Travolta impression forever.

One of the moments it became clear Pardew was losing the plot at Palace was his thumbs up towards a clearly embarrassed Steve Parish after the Eagles beat an awful Southampton side at Selhurst Park in December.

It looked like a man trying to convince everyone everything was ok while things were falling apart, a bit like the Terminator’s thumbs up as he literally goes down in flames.

5. Anything from I, Partridge

You could literally pick any scene from the Alan Partridge movie and it would be like taking a glimpse into Pardew’s time as manager at Palace, although this particular scene where the fictional Alan enjoys the limelight is particularly apt.